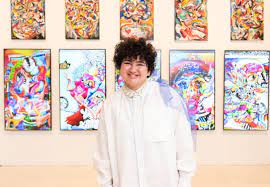 Victor Langlois, a transgender teen artist, has made up to $50 million in little over a year from the sales of his NFTs, as stated by  NBC News.

Since his story first made it to the headlines in June 2021 after his physical artworks and NFTs sales gave him the sum of $2.16 million at Christie’s auction house in New York, he has been able to garner even more attention and generated millions of dollars in NFT sales.

The collection, which explored his childhood and gender transition is termed  “Hello, I’m Victor (FEWOCiOUS) and This Is My Life.”

As stated in April 2022 by  Fortune, Langois, who is also known as FEWOCiOUS, made sales of almost $20 million of his digital artwork within 24 hours. As stated by the report, the whopping sale was the third-largest sale in the history of the NFT marketplace Nifty Gateway.

Speaking with Fortune at the moment, Langlois said, “It’s been hard for me to process, to be honest. The dream isn’t to relax and do nothing, the dream is to draw.”

“Hello, I’m Victor (FEWOCiOUS) and This Is My Life” represented the life of the 19-year-old transgender from ages 14 to 18 when he was taken out of a derogatory home to have a shelter with his grandparents in Las Vegas. Discussing this experience with his grandparents in an  interview with Esquire in June 2021, he stated “I thought I would be safe, but they were just as mean.” He added that he was afraid to come out as transgender to his religious family members.