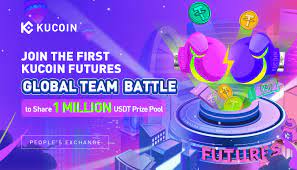 KuCoin has been increasing in users’ addresses despite the general downward trend in crypto market capitalization. KuCoin’s users hit 20 million even amid the trading competition among the crypto exchange platform. According to the record, KuCoin nearly doubles its user, for instance, 659% of the year-to-year count rise registered in Asia.

Read Also: SHIB Is Now In the Top 10 In terms Of Trading Volume Among The 100 Largest ETH Whales In The Last 24 Hours.

The platform was established as far back as 2017 as a multi-crypto ecosystem with its base in Seychelles,  located in the Indian Ocean which is between 480 and 1,600 km from the east coast of Africa. Despite this distance from the continent’s mainland, the nation is, politically, part of Africa. It is tagged “people’s exchange” because of its unique features which include;

Presently, it works with 700 cryptocurrencies in the spot and futures trading dashboard, and also it offers spot trading, margin trading, futures trading, P2P fiat trading mining, lending services in over 200 countries, and staking. It has been named the best crypto exchange by several platforms. For instance, Forbes in 2021, said it was the best of all and in 2022, Ascent also said the same thing.

The KuCoin being among the top five cryptocurrency exchanges highlighted some achievements in the course of the celebration. These includes:

Johnny Lyu, CEO of KuCoin, highlighted that despite the crypto market recession, KuCoin is expanding to new markets at an increased pace:

As KuCoin’s 5th anniversary is approaching, the number of registered users surpassed 20 million, which is another milestone for us. KuCoin is growing at a high speed with the support and trust of every user regardless of market conditions. To express our gratitude to users, we will provide more innovative products and services around NFT, GameFi, and Web 3.0 to help users access the crypto world more easily.

Register and stand a chance In The 1 million Prize pool

It also launches its inaugural Futures Global Team Battle with $1M in the USDT prize pool to introduce its instruments to new clients. The event will come up between 14th July and 31st July 2022. The interested KuCoin users are asked to register via KuCoin’s page, join an existing team and create their own. Once registration is completed, KuCoin users should trade futures to generate maximum trading volume. The more trading volume the team generates, the greater the prize it will win. Winners can compete for the top spot and earn up to 20,000 USDT; the team leader receives 20% of the team’s net price.

The top 10 users by invitation count will also receive a multiplier card, which means every reward their team gets will be double with this card. Also, the activist that invites their friends will enjoy 40% commissions on team member trading fees while their invitees will be rewarded with 500 USDT fee-deduction coupons.

Interestingly, for all the newbies, the kuCoin has launched a “Learn–and–Earn” with up to 200 USDT per person for the newbies in crypto to be rewarded for passing tests and quizzes, as well as for transacting and accumulating points.