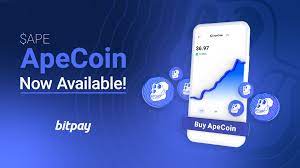 BitPay, a Blockchain Firm payment company and currency converter has just added support on ApecCoin. The good news was released through the official Twitter handle of BitPay:

BitPay now supports ApeCoin (APE) and Euro Coin (EUROC)! App users can buy, store, swap and spend in the BitPay Wallet, plus load and spend instantly like cash via the BitPay Card.

ApeCoin holders can now use their tokens to make payments at several Shops provided it partners with BitPay.

ApeCoin’s popularity is now rising recently as it is gaining support from different platforms.

As previously reported by Cryptolifedigital, the APE can now be used as a payment method across selected Gucci boutiques in the United States.

It is always the goal of the company to adopt innovative technologies that will give customers satisfaction and more also Gucci’s president and CEO, Bizzarri stated in May:

Now that we can integrate cryptocurrencies within our payment system, it is a natural evolution for those customers who would like to have this option available to them.

It is good to know that there are 13 other cryptocurrencies supported by the same blockchain firm which include Bitcoin, Bitcoin Cash, Ethereum, Wrapped Bitcoin, Dogecoin, Litecoin, Shiba Inu, ApeCoin, Euro Coin, and 5 USD-pegged stablecoins (GUSD, USDC, USDP, DAI, and BUSD).

As previously reported by Cryptolifedigital,  Swiss luxury watchmaker  Hublot made its newly-released 200 limited-edition watches available for buying using cryptocurrencies such as Shiba Inu and Bitcoin via BitPay. Through this partnership gave the users are now permitted to purchase with the enlisted coins via BitPay.

Read Also: Vitalik Buterin Says “I Don’t Expect Ethereum To Be Significantly Affected By Another Fork”

Notably, with this support, ApeCoin’s users also can acquire any items with their coins provided that the shop is partnering with BitPay.

Interestingly, BitPay has gotten a lot of expansion across the globe which implies that partnering with this giant blockchain and currency converter will bring a new dimension to the Apecoin market and also pave way for its adoption by several platforms, therefore, increasing its use-case.