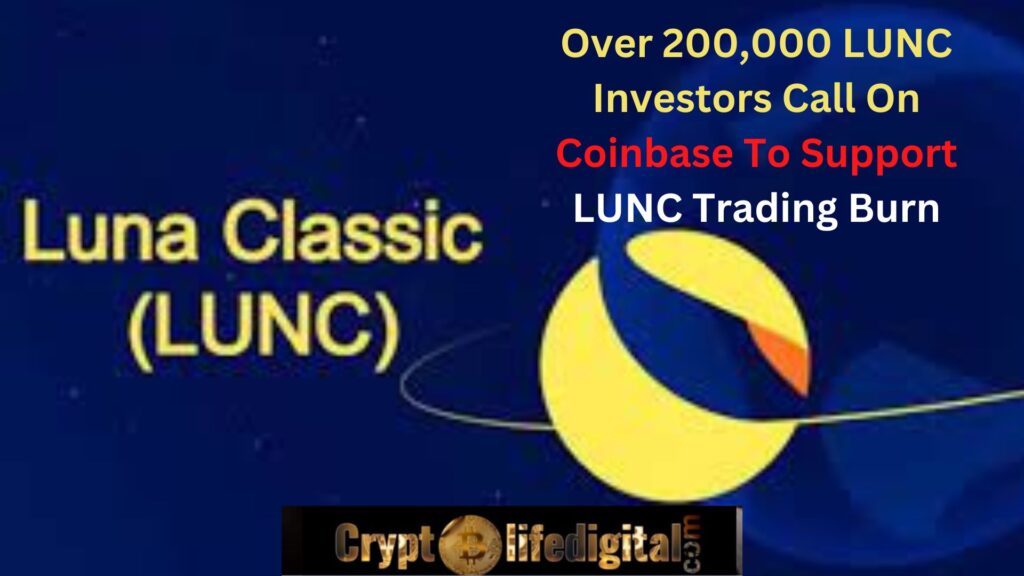 In the quest to increase the Terra Luna Classic burns, over 200,000 tweets have been counted beckoning Coinbase to list the cryptocurrency, to contribute to the ongoing burns of the coin.

Despite that a lot of trading platforms have added support to the ongoing LUNC burn proposal, the holders of the token are still working on new ways to intensify the burning of LUNC.

It is worth noting that over time now, the LUNC community are still expecting some top exchanges to add their support for the proposal to increase the burn drive. For instance, Coinbase and Robinhood are yet to enable support on the LUNC trading burn probably because of the terrible past of the token and its blockchain.

For this, the LUNC community ganged up to 200k on Twitter calling on Coinbase to list the cryptocurrency, to contribute to the ongoing burns of the coin.

It is worth noting that Coinbase is the third-largest cryptocurrency exchange, with a 24-hour volume of $1,025,605,577 ($1.02 billion) as stated by data from Coingecko. Following Coinbase’s features and popularity, LUNC holders believe getting the cryptocurrency listed on the exchange will accelerate the burn effort.

It is good to know that the LUNC community were doing all the calling to get the attention of Coinbase executives led by Brian Armstrong, the exchange’s CEO and co-founder, and possibly have LUNC listed for trading on the platform.

Although Coinbase is yet to react to the LUNC holders’ requests, the LUNC community has grown confident that their tweets would soon bring a positive result from Coinbase on the LUNC burn.

So far, over 12 exchanges have added support to the LUNC tax burn. Exchanges like Binance, KuCoin, MEXC Global, Lbank, Huobi, Bitrue, Gate.io, CoinInn, and Kraken have recently supported the proposal and out of these, only Kucoin, MEXC Global, and CoinInn will support burns on LUNC trading.

The over 466 million LUNC tokens were from the trading fees of LUNC trading pairs, with a 0.2% trading fee attached to takers.