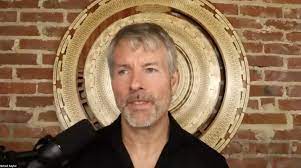 The largest independent publicly-traded business intelligent company, MicroStrategy, elected another person to stand in the position of the Chief Executive officer as Michael Saylor will assume a new role as of August 8th.

The update was brought through MicroStrategy’s official Twitter handle.

Although since the company was founded in 1989, Michael Saylor has been standing as the CEO and Executive chairman of the firm. In this view, the Company’s President in the person of Phong Le will now continue with the position of CEO and as a member of the Board of Directors while Saylor will remain the executive chairman of the Board of Directors and an executive officer of the company.

Read Also: Some PoW Proponents Dislike The Idea Of Merge, They May Fork And Mine Their Own Ethereum Chain After Merge.

Read Also: APE Can Now Be Used As A Payment Method Across Selected Gucci Boutiques In The United States.

Since the public announcement of the company in 1998, it has become global leading-business intelligence under the leading-quality of Michael Saylor, serving the largest most respected enterprises and government organizations across the globe.

As stated on its official website, MicroStrategy was the first publicly traded firm that raised support for Bitcoin, a revolutionary financial tech, as it’s primarily on innovation and long-term corporate strategy while continuing to make provision for oversight of the company’s Bitcoin acquisition strategy as head of the Board’s Investment Committee.

I believe that splitting the roles of Chairman and CEO will enable us to better pursue our two corporate strategies of acquiring and holding bitcoin and growing our enterprise analytics software business. As Executive Chairman I will be able to focus more on our bitcoin acquisition strategy and related bitcoin advocacy initiatives, while Phong will be empowered as CEO to manage overall corporate operations,

Mr Le Phong has been in the position of the company’s President since July 2020 and has also served in several other higher executive positions since joining MicroStrategy in 2015, including Chief Financial Officer and Chief Operating Officer. Mr Le has successfully managed the operations of the Company, delivering one of the best operational and financial years in the history of the Company’s software business in 2021.

I’m honored and excited to continue leading this truly innovative organization, as President & CEO. Our people and our brand carry incredible momentum. I would like to reinforce our commitment to our customers, shareholders, partners and employees, and I look forward to leading the organization for the long-term health and growth of our enterprise software and bitcoin acquisition strategies,

We continue to see the durability of our enterprise analytics business and the attractiveness of our cloud platform in our results this past quarter. With total revenue growth on a constant currency basis, and 36% year-over-year growth in subscription services revenues, our business remains resilient even in light of the continuing macroeconomic uncertainties,