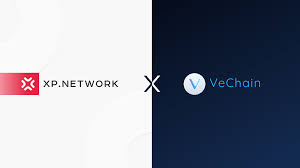 Recall, that in early 2022, Vechain shared a mission statement which focused on the growth of its tools, community, services, and global presence.

In the quest to achieve this, VeChain hasn’t ceased working. For instance opening the offices in Europe, setting plans to employ 100 foundation developers and proceeding to upgrade the beating heart of VeChainThor with revolutionary technology like POA2.0.

VeChain announced the successful grant application of the specialist NFT cross-chain bridge builder, XP.NETWORK. After much work by the VeChain team, the XP.NETWORK’s NFT bridge has now officially gone live as revealed on their official Twitter handle.

Read Also: Approximately 7,767 Solana Wallets Have Been Affected Through A Recent Exploit And Engineers Are Working To Get The Root Cause

The XP.NETWORK’s NFT bridge has gone live on the mainnet, therefore opening up VeChainThor’s vibrant NFT community to new blockchains and communities.

For NFT projects and users looking to make use of XP.NETWORK’s bridging service, we’ve included their official documentation below to guide you through the process.
The URL of the bridge is: https://bridge.xp.network/

The video guides on how to exploit the URL are posted on the official website of VeChain.

VeChain is a private consortium network launched in 2015. Its foundation launched the VeChainThor public blockchain in 2018, a fully programmable, EVM-compatible layer one smart contract platform.

VeChain pioneers real-world blockchain apps across the world with offices in Luxemburg, China, Singapore, San Marino, Milan, Ireland, Japan and some others.

This is creating the solution to turn the growing NFT market into an accessible and easy-to-use place.

XP.NETWORK bridge is one of its tools, which is the first chain-agnostic bridge built specifically to allow NFTs and funds to flow freely between networks and wallets while getting rid of complications like currency differences and token standards.