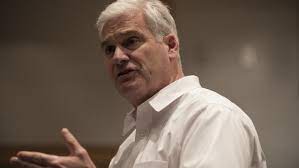 A United state member of congress by the name of Rep. Tom Emmer (R-Minn.) has taken the time to challenge the US Treasury Department on the current sanctioning of Tornado Cash saying this act of banning was an unprecedented action fighting the privacy and innovation.

It all happened during a “First Mover” Program on the CoinDesk TV, Tom said the Treasury Department’s Office of Foreign Asset Control (OFAC)’s sanction on Tornado Cash was not correct.

Emmer said things concerning digital assets should be handled by congress. It is congress that defines the qualified or accurate definition of cash, commodity and or security and an agency should regulate each. He added that Congress need to pull its “act together”.

In the course of the TV program, Tom used the opportunity to address the SEC’s issue of overreaching its authority.

Rep. Tom said SEC always do beyond its lane using its position as more of a “shakedown authority.”

Emmer cited an instance of requests for information and subpoenas the agency has sent to crypto companies, including companies who believe they do not fall under the agency’s purview.

“It is unlikely that any crypto regulation is going to move” as there are only 28 legislative days left this year. Tom said this pointing to the bill which says US regulatory agencies should monitor the crypto community. This certainty of this will likely come next year.

Howbeit, the proponents of Tornado Cash which include Ethereum’s Vitalik Buterin, said the service was created for anonymous donation and gave an instance of the donation to aid Ukraine in the ongoing war against the region.

A-29 years Old Man Was Arrested

A recent update revealed that a 29 years old man has been arrested on Wednesday. The identity of the man is still unknown as the Dutch police took him as a suspect working as a developer for Tornado Cash.