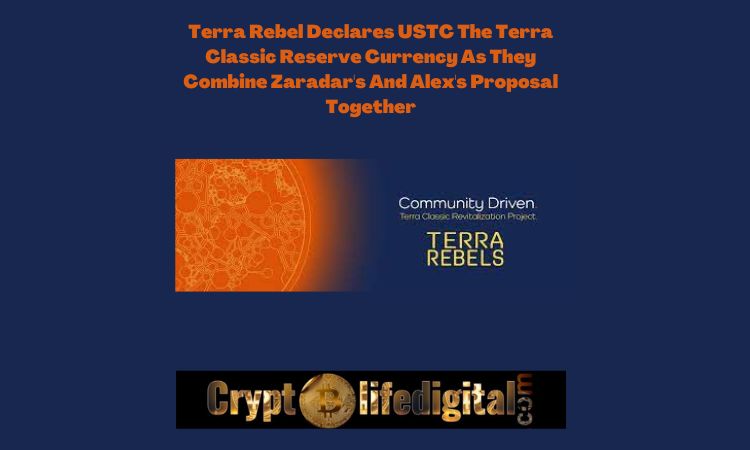 In the quest to have a successful re-pegging of the USTC, the Terra Rebel had made it known in the recent AMA session hosted by WSB Trader Rocko, a core developer at the Terra classic by the name of Tobias Anderson said that the developers are working to combine the proposal created by Alex ForShaw and Zaradar as recently proposed by Edward Kim.

This new proposition will not need any minting of any new token as stated by Zaradar. Tobias Further noted; “Alex and Max, they will work on an integrated proposal,” said Zaradar. “So we can sort of put that whole debate to rest, and you know, have a shared vision on how to fix this that will avoid printing more LUNC that will avoid neglecting USTC’s role as our reserve currency.”

In this same premise, it was made known that the TerraClassicUSD (USTC) will serve as the network’s reserve currency based on this plan. More also, Zaradar noted that the developers will also likely create a commodity token whose sale will help to strengthen the Treasury or community pool further.

“So in the joint proposal, USTC would be the reserve currency for everything,” said the Terra Classic core developer.

Read Also: Shiba Inu’s Proponents Are Deeply In Love with The Token As They Vouch To Stick To It

It is no news that the Terra Classic community has been discussing the better chance of succeeding the USTC repeg proposal. However, Alex ForShaw once created a proposal which require the minting of a new LUNC token which the community was displeased with.

It is worth noting that should the USTC repeg found a path by reclaiming the dollar peg, it would speed up the rate of LUNC burns which will lead to a reduction of the supply of the LUNC token and in the long run aid the recovery of the holders which lost as a result of the May Terra collapse.