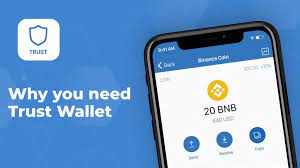 Binance’s Trust wallet recently announced that it has added its support for the Solana dApps. The new development was also brought to Twitter by the Trust –  Crypto Wallet.

Following the announcement, Trust wallet disclosed the particular Solana dApps it currently has connection point access to in this initial phase. The list stated by the Trust Wallet contains seven out of the Solana dApps and they include;

The implication of the support will allow the users of the mentioned Solana dApps to connect their accounts to their Trust Wallet.

Read Also: Shiba Inu Team Releases Its First Metaverse Project Dubbed Rocket Pond, Rocket Is A Way Of Saying The Asset Is Going to The Moon

It is worth noting that the Solana was launched as far back as 2022 and since its inception, it has gained support from the crypto ecosystem owing to its vow of faster transactions and affordable fees.

Also, the Solana network aims to bypass the competition via the usage of the Proof-of-History mechanism. The use of PoH enables Solana to verify transactions faster than most competitors.

Although, in recent times, the Solana network has experienced a tough time which ranges from several outages and congestion problems to some exploits initiated by bad players.

As reported recently, the network was laundered over $5 million through almost 8,000 Sol wallets although according to the investigation, the exploit was tied to a third-party app, Slope Wallet.

Despite the backlash received by Solana as a result of the various outages, its adoption has not declined. In this view, the Trust Wallet’s integration is expected to bring the network to some level of exposure.