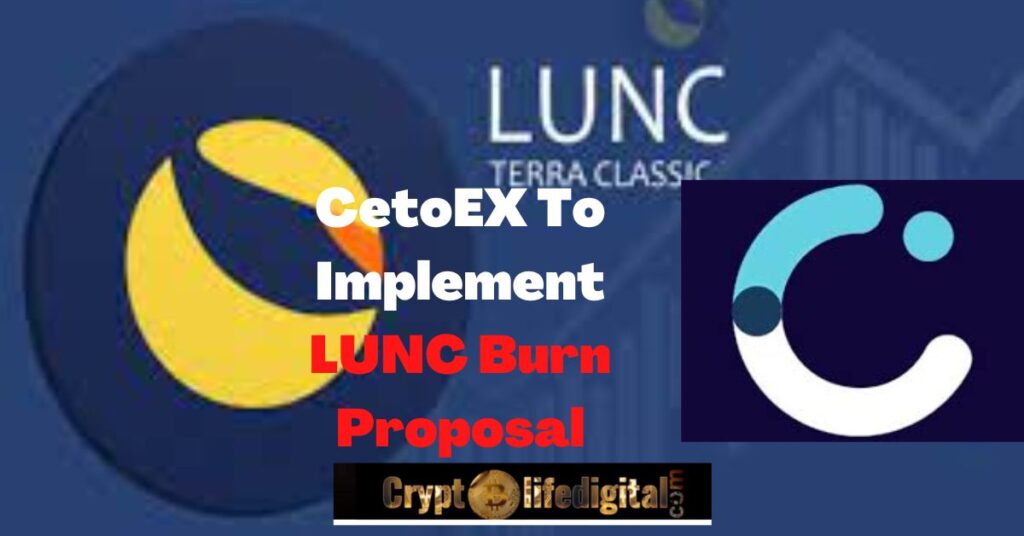 The popularity of the LUNC Tax Burn is on the increase as another trading platform called CetoEX unveils its plan to implement the proposal on LUNC trading on-chain and off-chain transactions.

The new development was shared on CetoEX’s official Twitter handle saying that Terra Classic (LUNC) listing soon on its platform.

CetoEX Global Services Crypto noted in a recent announcement that it would list LUNC on its platform on October 10, 2022, at midnight UTC.

It is a centralized cryptocurrency exchange permitting the users to transact with over 20 cryptocurrencies which include Bitcoin and Ethereum. It is worth noting that the trading platform responds to customers 24/7 on its mobile app.

Read Also: Shiba Eternity Is Now Available For Global Download By Both Android And iOS Users: Check The Detail

The update is a positive movement to the LUNC community as they look for more support from the exchanges across the globe and also see the exchange support as part of the drive to the ongoing LUNC burn.

At the moment, there is a significant number of trading platforms that have added their support to the proposal before the public launch on September 20th, 2022.

The LUNC Tax Burn proposal has been released more than a couple of weeks ago. Exchanges like Binance, KuCoin, MEXC Global, Lbank, Huobi, Bitrue, Gate.io, CoinInn, Kraken, and CryptoCom have recently supported the proposal and out of these, only Kucoin, MEXC Global, CoinInn, and eToro support burns on LUNC trading.

Following the support of MEXC Global,  initiated its 14-day LUNC burn event which was concluded on the 17th of September with the burning of over 466 million LUNC tokens.

Also, Binance initiated its first burn after a long time of waiting by burning a total of 5.5 billion LUNC tokens and totalling its burn to over 13 billion the following day.

It is worth noting that the LUNC 1.2% Tax Burn proposal is designed to reduce the total LUNC supply from 6.9 trillion to 10 billion.