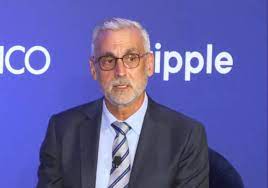 The SEC’s chairman, Gary Gensler, was slammed by Ripple’s Counsel, Stu Alderoty, saying that the crypto regulator market Shakedowns are not protecting consumers.

As stated in the August 28th opinion piece on Wall Street dubbed “The SEC Wants to Be America’s Crypto Cop,” the Ripple’s Counsel claimed the SEC is downcasting his fellow regulators instead of focusing on providing regulatory clarity for crypto.

In the piece tweeted by Ripple’s Counsel, Stu Alderoty, he cited an instance of the recent Shakedown of BlockFi by the SEC, which resulted in the company ending “up on the auction block” and two other similar companies going “belly up,” arguing:

This piece was a response to the August 19th article;  “The SEC Treats Crypto Like the Rest of the Capital Markets” which was published in the Wall Street Journal.

Following this, Stu Alderoty argues that the SEC hasn’t provided any clarity for crypto regulation but instead declares itself as “the cop on the beat” for crypto. Alderoty also said the chairman is “pushing aside his fellow regulators” and “front-running” President Biden’s executive order which asks regulators to collaborate on crypto regulation.

According to Ripple’s counsel, SEC has neither abided by the executive order nor provided any “regulatory clarity for crypto” and is instead “protecting its turf at the expense of more than 40 million Americans in the crypto economy.”

Recall, that Gensler stated in his article that US federal security laws were created to protect the investors and that “there’s no reason to treat the crypto market differently from the rest of the capital markets just because it uses a different technology.”

John Deaton, an attorney representing the amici status and 72,000 XRP holders, recently called out Gary Gensler, President Joe Biden’s elect run an agency intended to focus on stock scammers ripping off the unsuspecting for pock-nosing into crypto while neglecting his duty.

In a Fox Business opinion piece filed by John Deaton on the 21st of August, the SEC called out to the attorney John for extending its tentacle beyond the limit of its constitution in fighting crypto.

Deaton accused Gensler of his attempt to turn the decades of securities law and laid down principles.