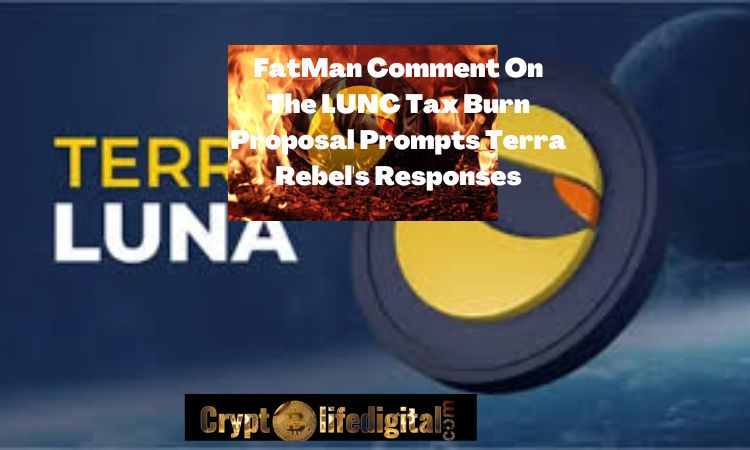 While the whole community is happy with the idea of the LUNC proposal, the famous Terra whistleblower FatMan commented via a tweet saying that reducing the tax burn parameter to 0.2% and allocating 10% of the tax to the community pool for development is authoritarian.

FatMan tweeted; “Giving 10% of the tax to yourself is an even worse idea than the burning tax,” tweets FatMan. “Devs deserve to be paid – either through donations or via formal community pool spend proposals – but automatically redirecting 10% of every burn to “contributors” is authoritarian & wrong.”

Read Also: Ripple Ads Appearing On The World Trade Prompts Digital Perspectives To Say Ripple Has No Lose In The Ongoing Lawsuit

FatMan also stated that the Terra Classic chain should let go of the proposal and compulsory donation and focus on making provisions for utility and attracting decentralized applications (DApps).

Following the comment of the FatMan, the community of LUNC reacted to his comment seeing it as an unpleasing one. For instance, Edward Kim clarified that funds allocated to the community pool must still pass a governance vote to be distributed. Consequently, Terra Rebels do not have free access or a claim to the pool.

Furthermore, the popular Terra Rebel, Alex ForShaw, described the comment as unprofessional to reason in such a way. In conclusion, Alex ForShaw challenged FatMan to come up with a better proposal.

Another member of LUNC StrathCole by name also reacted to the comment saying that even if the proposer explicitly stated that the 10% should be reserved for developers, it is not what the proposal achieves at the end of the day.

It is worth noting that none of the Terra Classic developers was involved in writing the proposal in question – proposal 5234.

It is good to know that proposal 5234 surfaces the moment the 1.2% tax proposal failed to meet the expectation and is expected to attract on-chain volume loss since the 1.2% tax implementation and provide a means for sustainable chain development.

Duncan Day, the one that wrote the proposal consented to the opinion but also added the outcome of the proposal will be exactly as stated by Kim.