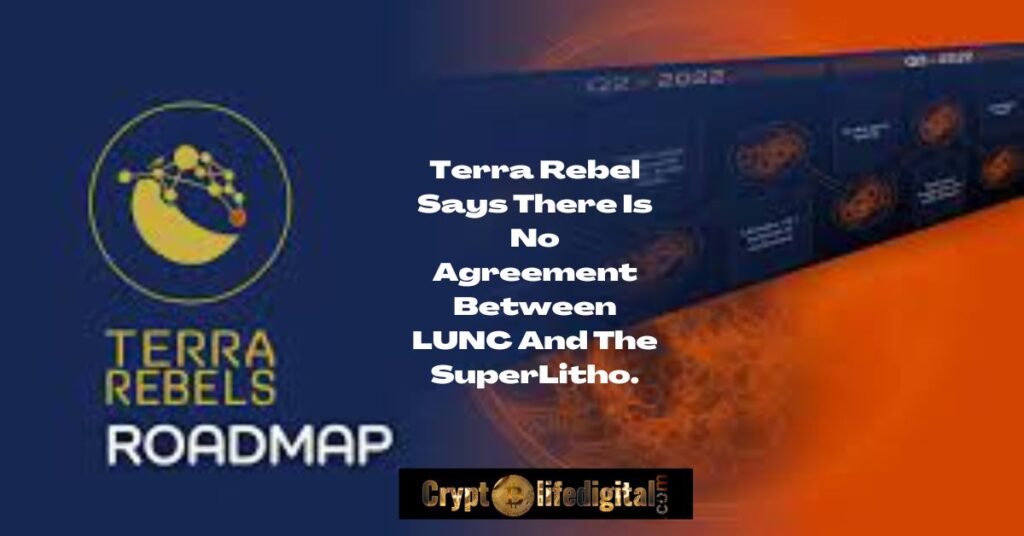 Following the recent announcement of Kaj Labs saying it will soon burn a total of 2.5T LUNC tokens in support of the ongoing tax burn proposal,  reXx of the Terra Rebel has taken time to clarify the statement saying that despite the continuous mentions by Kaj Labs in the press releases for their play-to-earn (P2E) game, there is no agreement between the group and the company, SuperLitho.

Per reXx, there is no aorta of an agreement between LUNC and the SuperLitho.

Commenting on this, Terra Rebel says; “LUNC community. I’m not sure why @SuperLitho @KaJLabs decided to throw Terra Rebels name into their medium article, but no such agreement between us and Lithosphere was established,”

Terra Rebel Clarifies That There Is No Between LUNC And SuperLitho

He further stated;  “We have never agreed to any announcements. We are not affiliated with this company in any manner.”

Aside from the comment of Terra Rebel, there have been several comments from the members of the community taking in support of the stated view. For instance, Alex ForShaw, the re-peg proposal owner and one of the authors of the LUNC 1.2% burn proposal, blatantly dubbed the project a scam.

It was previously reported by Cryptolifedigital that Kaj Labs, the development team at Lithosphere’s gaming series ‘Finesse,’ a two-chapter Play-to-Earn (P2E) game, unveil its plan to support the LUNC burn proposal with the massive burn of 2.5 trillion LUNC tokens.

Kaj Labs announced this new development as it noted that it would allocate a total LUNC burn ranging from $50 million to $100 million.

Kaj Labs Proposal Is To Get LUNC’s Attention

Following its plan, Kaj Labs released a roadmap yesterday in support of his plan saying Terra Rebels are also to make announcements concerning the game, implying contact and agreement between both parties.

Unfortunately, the project was later realized to be a trap to get the LUNC community’s attention and influence.

It is worth noting that yesterday, Alex came up to clarify that its proposal was not going to be involving minting 500 billion LUNC tokens anymore and also Terra Rebel commented on the recent statement of Zaradar saying LUNC code is never under nobody’s charge. At the moment, the community await Zaradar’s proposal for them to debate.