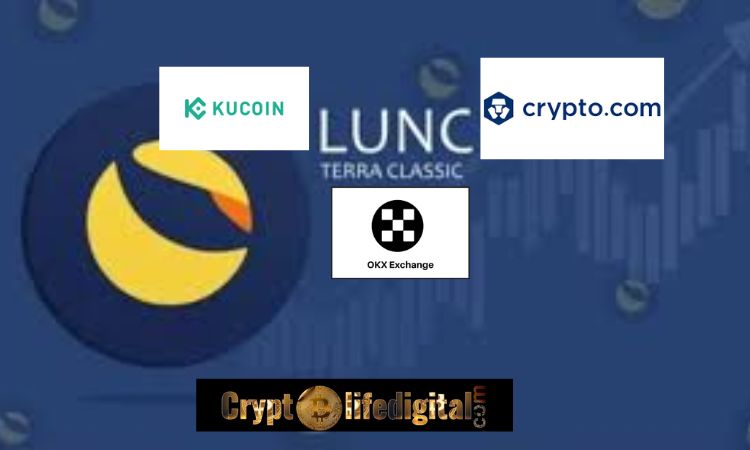 Three cryptocurrency exchanges announced they would implement the New LUNC proposal to reduce the tax levied on LUNC and USTC on-chain transactions.

Following Binance’s announcement of reducing the 1.2% parameter to 0.2%, exchanges have been showing support for the latest tax burn proposal of the LUNC token.

Exchanges like the KuCoin, OKX, and Crypto.Com, followed the same path as Binance, the biggest cryptocurrency exchange.

CryptoCom Agrees To Implement The Proposal 5234

In a newly shared tweet by crypto.com, it announces that it will reduce the tax burn parameter for Terra Classic token’s on-chain transactions, including deposits and withdrawals, from 1.2% to 0.2% while still maintaining the Tera classic token’s withdrawals and deposits on regular fees.

In the same manner, OKX stated that it would also support the tax burn reduction levied on LUNC and USTC on-chain transactions and promised to implement it later today.

OKX noted; it will make the following updates to the deposit and withdrawal fees for LUNC and USTC on the Terra Classic network once the new tax burn mechanism is live,”

Furthermore, the OKX platform made it known that it will stop the deposits and withdrawals for Terra Classic tokens today at 11:00 UTC while the changes take effect.

Another big crypto exchange, KuCoin joined the suite with the two exchanges to support the reduction of the LUNC and USTC  tax burn parameter.

KuCoin stated that “ it will support the tax burn deduction of Terra Classic (LUNC) and Terra Classic USD (USTC) tokens when the 0.2% tax burn goes live at the Classic Terra block height of 9,878,400,”

It is worth noting that proposal 5234 which was passed newly will allow 10% of the fee to be channelled to a community pool to finance the project’s development and advancement.

Binance supported the proposal with immediate effect after it had burned a total of 11 billion via the former proposal, a 1.2% tax burn.