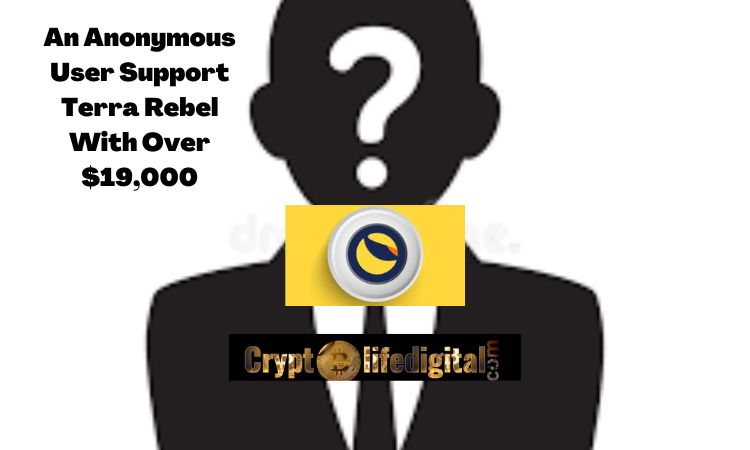 There have been a series of donations toward the building of the LUNC network, an anonymous user showed up to support the project, LUNC revitalization with a sum of $19,520 when summing with her former donation.

Behind the LUNC revitalization, Terra Rebel could not be silent on the anonymous donor but rather broke the silence as it announced the financial support and tagged it as an extreme act of generosity.

Terra Rebel noted that; “There was an extremely generous donation made towards TerrRebels OpenCollective. Whoever this is, please DM us so we can formally thank you for your generosity and contribution to help us continue to serve the LUNC community,”

The Anonymous User Takes The Lead

It is worth noting that the donation was made yesterday and surprisingly, the donation was the first from the particular donor as it has supported the project with $254 through Rebels’ Open Collective, which puts the user’s total donation at $19,775.

Surprisingly, the donor is still anonymous as no one can identify her but notwithstanding, the Terra Classic community has expressed gratitude to the anonymous donor.

Another LUNC member, Cryptowatch, appreciated the donor saying “Thank you for your generosity”

It is worth noting that following the Terra Open Collective Program inception, a lot of LUNC’s proponents have displayed their strong support towards the LUNC building as a total of 146 people have contributed financially to the program, with Orquda ranked as the highest donor, with a total donation of $19,775.

Per the record of the donation, Neblio followed the anonymous donor with a sum of $9,984.

It is no doubt that LUNC will be fully revived, seeing all the efforts the community has been channelling towards the revitalization. For instance, LUNC DAO recently beckoned to the LUNC CEO to incinerate $1 worth of LUNC as a means of reducing aside the tax burn proposal.