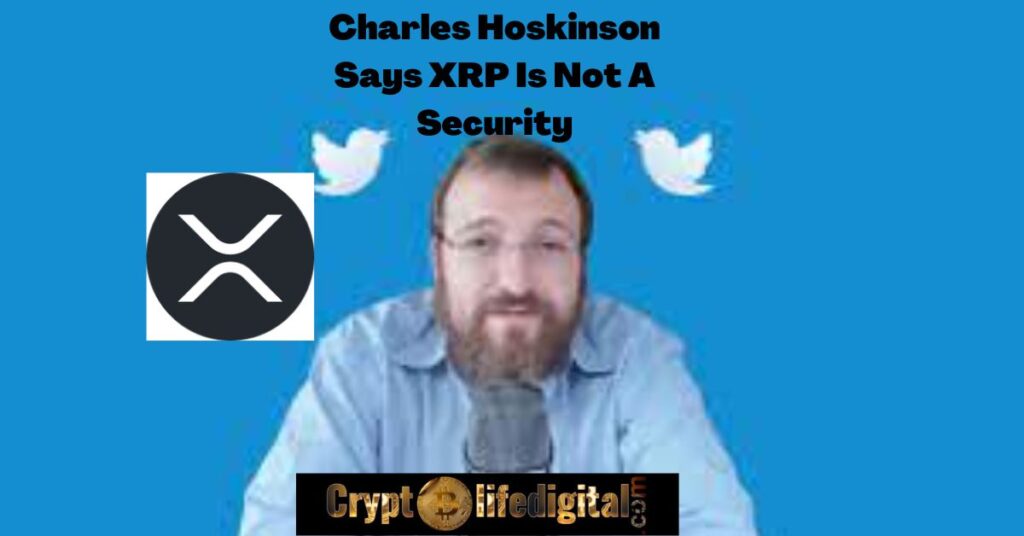 It is worth noting that Cardano’s founder has gone on Twitter to re-construct his statement concerning Ripple in the ongoing lawsuits against SEC saying XRP is not a security and stating the reason to back it up.

Recall that Charles Hoskinson once stated that the XRP community is trying to invent a grand conspiracy that some corruption occurred between the SEC and Ethereum (ETH).

Following his statement, there are a lot of hits from the community reacting to the displeasing statement concerning Ripple.

Charles recently stated in a  long Twitter thread, the Cardano (ADA) founder noted that he has always had a double viewpoint on the Ripple-SEC case.

“Recently, the most surprising thing to me has been how hard I’m being hit by some on the XRP side for my recent comments on their SEC issues. I’ve always been of two minds here and I guess some nuance is required to explain, which the internet always lacks,” he stated.

Charles Hoskinson Now Talks In Favor Of Ripple, XRP Is Not A Security

Hoskinson says that the SEC is adopting the wrong approach saying that they are ill-equipped by law and policy from the legislative arm.

He further noted in a tweet; “cryptocurrencies aren’t immune to regulation. Markets need to be stable, well-functioning, trusted actors monitored, and cartels examined. Commodity regulation is principles-based, market-oriented, and global by nature. Commodities survive those who aggregate them.”

Read Also: Shib Burn Rate Spikes Over 1900% As Over 56 Million SHIB Is Incinerated

Furthermore, he said the XRP token is not a security but a commodity against the SEC’s view and went further to back his point saying  XRP is highly decentralized and offers a lot of utility.

Charles noted; “I’ve always taken a position that most layer 1 protocol aren’t securities because it’s bizarre and senseless to consider something that offers utility, is decentralized enough to have operators and builders throughout the world, and survives its founders passing Howie.”

He concluded that “Ripple created something that has an ecosystem that will survive Brad, Chris, David, or anyone else. The very fact that there is an independent XRP army criticizing me is proof of this reality. The ledger will likely run for decades trading value,”