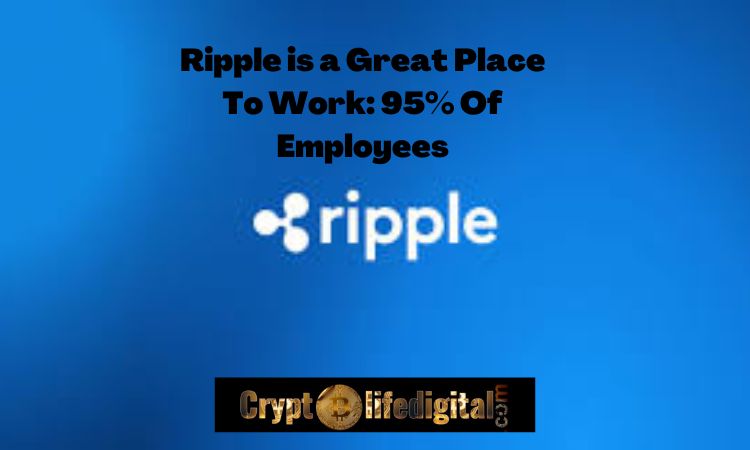 Per the tweet recently shared by Ripple, the lead blockchain company noted that the public considering joining its team, saying Ripple is a great place to work as Ripple unveils the number of vacancy roles to be filled by interested people.

Ripple is a Great Place To Work: 95% Of Employees

According to the May FORTUNE survey, 95% of staff stated that the Ripple blockchain company is a great place to be. It is worth noting that this percentage is greater than an average of 57% in the US.

Read Also: Ripple Says SEC Has No Legal Proof To Qualify XRP As A Security

it is worth noting that the leading blockchain company occupies the 34th position in FORTUNE’s list of 100 best medium places to work.

The research made on Ripple’s open positions reveals that there are about 156 available roles, with some roles that need filling in multiple regions, which could easily multiply the number of open positions.

It is no doubt that having such a great number of unfilled roles is a clear indication that the company looks forward to expanding in this period when other firms are cutting down their labour force.

Furthermore, Ripple’s quest for expansion is an indication that there is a victory waiting ahead for Ripple in the ongoing lawsuits.

Although the current Ripple CEO once stated in April that nothing changes in case Ripple loses to SEC in the lawsuits. It is good to know that the Garlinghouse was not of victory as it has over 95% of its users outside the US.

Fortunately, the lawsuits between Ripple and SEC are drawing to an end in favour of Ripple. Yesterday, the US commission agreed to hand over Hinman’s document to Ripple.

It is worth noting that Hinman’s document is believed by the Ripple that there must be something mentioned concerning Ripple which sprang the fight between Ripple and SEC in 2018.