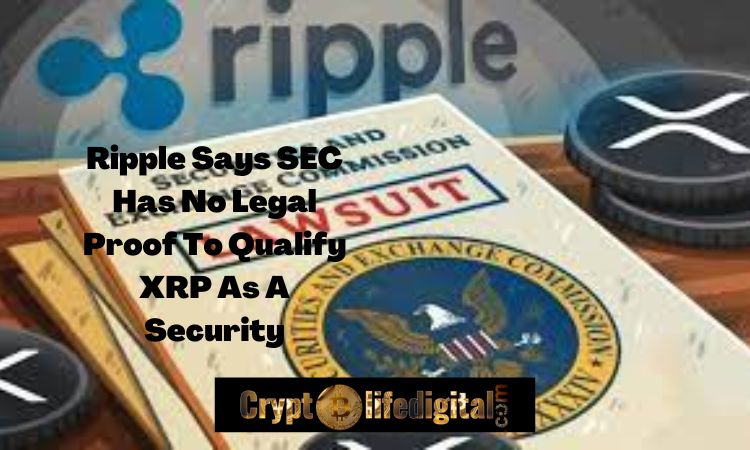 In a recent update, Ripple has filed an opposition against the SEC’s summary judgement motion, saying SEC has no legal proof to call XRP security.

Ripple noted that SEC wants to use its summary judgement motion in the ongoing lawsuit to aid its journey to an area of no jurisdiction.

It is surprising that till now, there is no legal proof from the SEC that make the XRP a security as noted by Ripple. Ripple further added that SEC’s summary judgment motion did not point to any “investment contract” issued and sold by Ripple.

Per Ripple’s comment; “The theories that the SEC does advance are insufficient to prove its case and are internally inconsistent from element to element of the Howey test,”

As said earlier, there has been no solid legal proof from SEC that makes XRP a Security. Ripple noted that SEC was moving to and fro asking the court to ignore the expectations of On-Demand Liquidity (ODL) service.

Ripple also noted that SEC requested that the court should focus on the expectations of downstream investors who bought XRP from ODL users while refusing to establish maybe XRP purchasers invested in a common enterprise or made any form of payment to Defendants.

As drawn from Ripple’s opposition; “Even taking its arguments on their terms, the SEC still fails to carry its burden to show that any element of the Howey test is met, let alone to show that no reasonable jury could disagree,”

On the element of expectation of profits, Ripple noted that; “the only basis the SEC has for suggesting otherwise is a statement from David Schwartz that Ripple is “legally obligated to maximize shareholder value.”

As a matter of evidence, Ripple elaborates on the above point by pointing to the affidavits signed by XRP holders.

On the same premise, attorney Deaton, the one that represents amici status attorney and over 75,000 XRP holders, shared a tweet to also support the development.