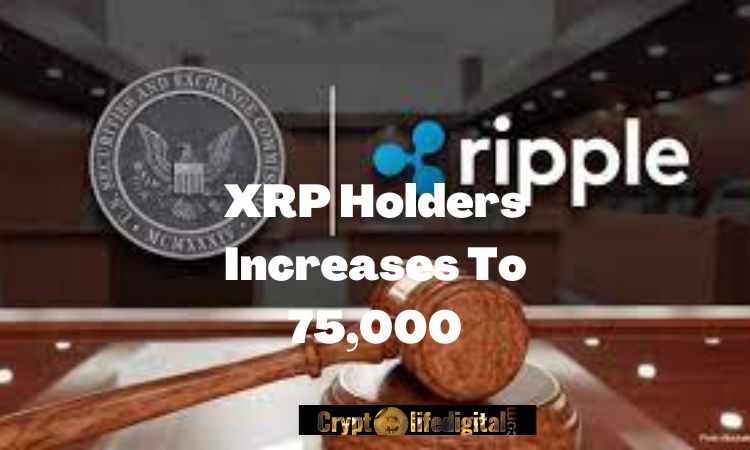 In the ongoing lawsuit between Ripple and SEC, it is worth noting that the number of the XRP holders increases from time to time as the attorney behind the XRP holder and amici status put it upon himself to get justice for XRP victims of the SEC lawsuit, and the process has continued to gain momentum.

XRP Holders Increases To 75,000, The Lawsuit May Be In Favor Of Ripple

Attorney John Deaton shared the new development in the number of the XRP holder on its Twitter handle, asking community members to engage with Deaton for the required information as he continues to work on behalf of 75K XRP holders.

Recall that Attorney Deaton recently called on the holders of XRP to provide info about Ripple, Bitcoin, and Ethereum’s market capitalization as of January 3, 2018.

“I need help with something. How can I determine how much of the total market cap Bitcoin, ETH, and XRP made up in January 2018?…” Deaton requested.

It is worth noting that the Ripple community has never slacked once on the ongoing lawsuit against SEC, proving that XRP is never security but a commodity.

The number of XRP holders recently hit 71,000 XRP as a sign of strong support for Ripple in the ongoing lawsuit.

It is worth noting that the class action is due to the huge losses XRP investors suffered following a lawsuit filed by the SEC against Ripple. The Securities and Exchange Commission claims that XRP is a security, adding that Ripple breached U.S. securities laws by conducting an unregistered offering for the cryptocurrency in 2013. For this reason, the holders show up in the favor of the blockchain.

Following this, exchanges like Coinbase ceased their support of the XRP as they feared of being probed by the US Commission for supporting an asset that is a security.

Deaton recent told slammed SEC saying it has no focus on the ongoing case as its proof doesn’t point to a precise direction and many crypto veteran and founder has also risen to say something in favour of the blockchain company.

For instance, Cardano’s founder and IOG CEO said that SEC shouldn’t call an asset that has a lot of use cases like Ripple’s XRP security.